Yeah, I know it’s Tuesday.  That makes this Random Thursday post even more special.  And random.

As promised, even if it did take a bit longer than expected, I’m sharing a few of my favorite garden friends!  I love the birds that visit our bird-feeders but my lame camera doesn’t manage to capture bird pictures at all.  They’re such flighty little things!  And our cats make them nervous.  Go figure.

A few weeks ago my very generous sister lent me her not-lame camera for a wedding, and I took the opportunity to capture a few photos of my flitty little garden friends.  My son helped, keeping an eye on the bird-feeder through the window and whispering to me when it was time to grab the camera and sneak a shot.  I’m not great at identifying birds, but I’m pretty sure this is a Cassin’s Finch.  It’s very pretty, and apparently quite aware of the fact, since it posed for quite some time for the camera.

Happily, most of the birds in our yard get along well and share the bird-feeders.  Here my friend the finch was sharing with a Lazuli Bunting.  They were having quite a nice time together picking through the bird-feeder and dropping their unfavorite seeds to the ground below.  Birds are apparently very picky eaters.  They all do this.  And it shouldn’t be a problem, since the birdseed wasn’t supposed to sprout.  Our lawn is showing evidence of false advertising by the birdseed people.  There’s a spot under the bird-feeder that’s sprouting all kinds of non-grassy green things.  Grrr.

Some of the birds aren’t quite as friendly.  This Mean Bully Bird doesn’t share well.  He seems to think he should have the entire bird-feeder to himself.  He’s a bit bigger than the others, and if they happen to try to eat at the other side of the feeder while he’s there he flaps and pecks at them until they all leave him alone.  Every now and again a little bird feels brave and approaches again, but he’s unyielding.  This picture captures his expression perfectly.  I’m fairly certain that “Mean Bully Bird” is not his technical name, but I was miffed at him and didn’t think he was worth the time it would take to look him up on a bird identification site.  And then I couldn’t help myself of course.  “Mean Bully Bird” is a Black-headed Grosbeak.

I wonder why it is that I don’t like him when I still adore humming birds even though they’re just as mean.  Maybe it’s because they only pick on each other, and not smaller birds.  Well, to be fair there really aren’t many smaller birds to pick on.  They definitely aren’t as vain as the Cassin’s Finch – they don’t stand around and pose for anyone.  They’re all business, in and out, eat and run. . . I feel very lucky to have captured them at all.  I love sitting out on the deck in the evening when they start to come out to eat.  They aren’t frightened of us at all, and it’s fun to hear them hummmmm back and forth.  They’re gorgeous and lightening fast.  I absolutely adore them.

And speaking of birds that I adore, here’s the Lazuli Bunting again.  I first noticed them a couple of years ago when I glanced out of the front windows and they were everywhere, covering the trees, lawn, bushes, everything.  A group of these birds is called a “mural” and it’s so very appropriate.  We don’t get many really colorful birds here, so they really stood out – and now I watch for them every year.  They haven’t come in a large mural since those glorious few weeks, but every now and again we get a few and I still just love looking at them.  A lot.  Don’t be surprised if they suddenly appear in an art set.

I missed out on getting a photo of another favorite bird.  I could hear its call – so distinctive – but it wouldn’t come down to have it’s photo taken.  My son has been best friends with the “Yoo-Hoo” birds since he could first talk, sitting on the front step and mimicking their call back to them.  With years of practice he’s gotten pretty good at it, whistling now instead of calling out “yoo-hoo.”  After all these years I finally caught a glimpse and was able to identify it.  The Yoo-Hoo bird is officially a Black-Capped Chickadee.  I love having a chickadee in our group of garden guests because it brings back such lovely memories of a French woman who lived near us when I was young.  Her name was Marie, but we called her Mrs. Chickadee because whenever she passed us while walking her little dog Bijou she would call us “sweet little Chickadees” in her beautiful French accent.  And that, my friends, is random.  But sweet.

And finally, I captured (on film, or pixels I suppose) this beautiful Robin.  Which brings back all kind of other lovely childhood memories, this time of my grandpa and the poem he learned to recite when he was a small boy, and taught to us later.  “Once there was a Robin. . .” is just a little children’s verse, but it makes me emotional whenever I hear it, or see a robin.

Well, perhaps not finally, because I did find another visitor to our garden the other day.  Some of you will recognize him from this post.  The Family Squirrel was hiding near my mailbox, thanks to my very sneaky sister.  He’d been out in the rain for nearly a week, poor thing.  It was probably much less traumatic than the time he spent in my mother’s freezer.  My sneaky sister has excellent timing.  Mission Impossible-esque plans are in the works now, because a family reunion is coming up.  That means nobody, and I do mean NOBODY, is safe from The Family Squirrel.

Barbara Anne Williams designs from her home in the beautiful Cache Valley of northern Utah where she finds inspiration in her natural surroundings, home and family, and old books.
All Posts »
PrevPreviousMmmmm, Strawberries!
NextWeekly Card Pattern – 1st EditionNext

He Shall Direct Thy Paths – Proverbs 3:6 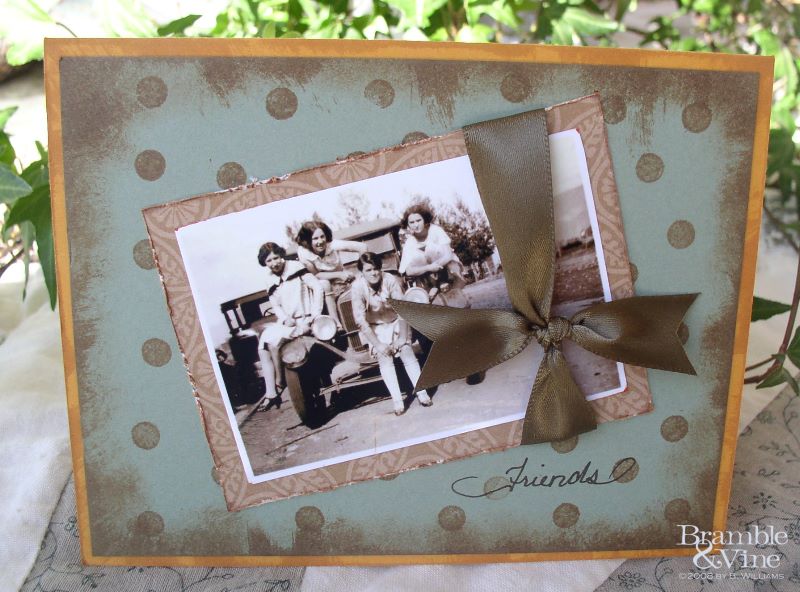 More than a Newsletter